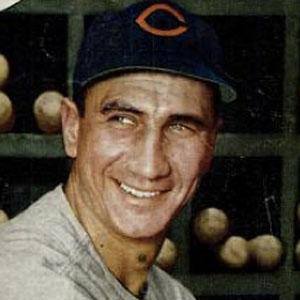 2-time All-Star MLB outfielder who hit 288 home runs during his 15 years in the majors; named National League MVP in 1952 after leading the NL with 37 home runs for the Chicago Cubs.

He was born and raised in the Pittsburgh suburbs and worked odd jobs as a child to help support his family.

He spent the last three years of his career with the New York and San Francisco Giants, retiring in 1959.

He married his second wife Esther in 1940 and remarried his first wife Jeanne in 1979 after Ester passed away.

He spent a season playing alongside the legendary Stan Musial on the St. Louis Cardinals.

Hank Sauer Is A Member Of