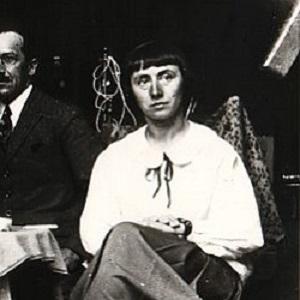 Weimar period Dada artist who pioneered the photomontage art form. She was revolutionary in that she included same-sex couples in her work.

She studied at the National Institute of the Museum of Arts and Crafts under the famed artist, Emil Orlik. She became friends with Raoul Hausmann in 1915, who introduced her to the Berlin Dada movement.

She often investigated feminist and political themes in her art. Her best known work, "Cut with the Kitchen Knife through the Beer-Belly of the Weimar Republic" from 1919, offered a harsh socio-political critique of her homeland.

She had a seven-year relationship with Hausmann that ended in 1922. She then entered into a relationship with female writer Til Brugman in 1926 that lasted until 1935. She was married to Kurt Matthies from 1938 until 1944.

She was greatly influenced by the work of Salvador Dali.

Hannah Hoch Is A Member Of