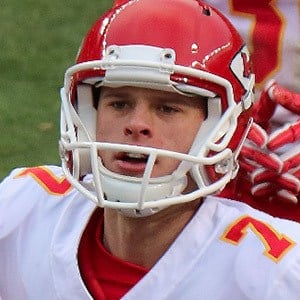 Kicker who has gained fame for his play with the Kansas City Chiefs of the NFL. He was named to the NFL's PFWA All-Rookie Team while setting the Chiefs' all-time record for most field goals and points as a rookie during his 2017 debut season.

He was a three-sport athlete in high school, and won three straight soccer state championships. He later played NCAA Division I football for the Georgia Tech Yellow Jackets.

He set the then-NFL record for most field goals made as a rookie in 2017. He was named as an alternate to the 2018 NFL Pro Bowl.

He and his wife Hailey welcomed their first son James in January 2019.

He was nicknamed "butt kicker" by the Chiefs' coach Andy Reid during his rookie season of 2017.

Harrison Butker Is A Member Of