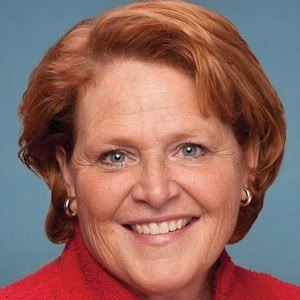 Politician and member of the Democratic party who became a U.S. Senator from North Dakota in 2013 after serving as the state's 28th Attorney General.

She earned her B.A. from the University of North Dakota in 1977 and her J.D. from Lewis and Clark Law School in 1980 before being hired by the Office of the North Dakota State Tax Commissioner.

She voted against the Manchin-Toomey amendment introduced in the Senate after the Sandy Hook Elementary School shooting, which would require universal background checks for all firearm purchases.

She had two children with her husband Darwin.

She supported the Buffett Rule, President Barack Obama's tax plan that would apply a minimum tax rate of 30 percent on individuals making more than a million dollars a year.

Heidi Heitkamp Is A Member Of