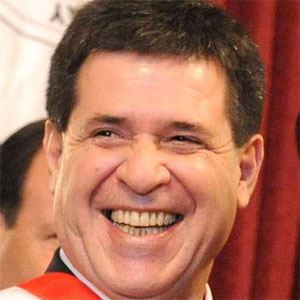 Paraguayan entrepreneur and politician who was elected president of Paraguay in 2013.

When he was nineteen, he founded a company for currency exchange that eventually became the Banco Amambay. He founded or spearheaded twenty five companies over the course of his career.

He was the focus of several governmental investigations, including ones for money laundering and ties to the drug trade.

He married María Montaña de Cartes, with whom he had three children.

His inauguration was attended by Chilean president Sebastian Pinera.

Horacio Cartes Is A Member Of