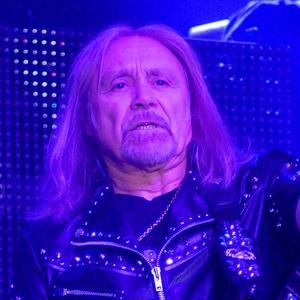 Co-founder and bassist for the Grammy Award-winning band Judas Priest who wrote the songs "Winter" and "Caviar and Meths."

He found the vocalist for Judas Priest when dating Rob Halford sister and mentioning to him that they needed a singer.

He played twin-neck bass guitar for the DVD Electric Eye.

His father taught him to play the double bass. His first wife's name was Sue and they had a son named Alex. Eventually, Hill married his second wife named Letitia and had a daughter named Alex. He is now married to Jean and has a stepson named Andrew.

He was in Judas Priest with K.K. Downing.

Ian Hill Is A Member Of