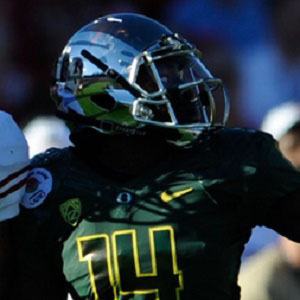 Standout cornerback who began his career with the Oregon Ducks in 2011. He is widely considered one of the top defensive prospects for the 2015 NFL Draft.

He attended Chino Hills High School, where he was the Serra League MVP and a 2010 California All-State Defensive First-Team selection.

His parents are Queen and Joshua Ekpre-Olomu. He has a brother and two sisters.

He was coached by future NFL head coach Chip Kelly at the University of Oregon.

Ifo Ekpre-olomu Is A Member Of