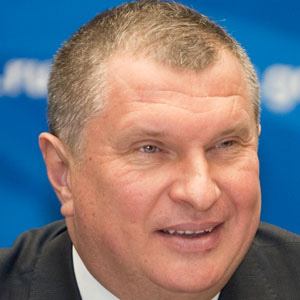 Close associate of Vladimir Putin who was in charge of negotiating a $25 billion oil deal with China. He is sometimes referred to as "Darth Vader" by the Russian press due to his scary demeanor.

A spy for the Soviet Union during the Cold War, he became Putin's deputy chief of staff, and was put in charge of the Rosneft, Russia's giant oil company.

He was ranked by Forbes Magazine as one of the world's most powerful people, and Time Magazine listed him among its 100 most influential people in 2013.

He his daughter Inga married another high-ranking Russian government official.

When Dmitry Medvedev temporarily succeeded Putin as Prime Minister, he was made the deputy prime minister, a move widely seen as a demotion.

Igor Sechin Is A Member Of