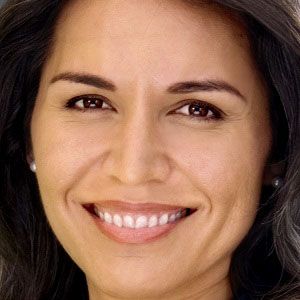 Democratic congresswoman who assumed federal office in 2013 as a Representative of Hawaii's District Two. She also served as the Democratic National Committee's Vice-Chairperson.

She earned a degree in business from Hawaii Pacific University. She began her political career as a member of the Honolulu City Council.

She commanded a Military Police unit in the Hawaiian Army National Guard.

She and her four siblings were born to Hawaiian politician Mike Gabbard. She was born in American Samoa and raised in Hawaii.

She and fellow Democratic politician Mazie Hirono represented Hawaii in the U.S. House of Representatives and the U.S. Senate, respectively.

Tulsi Gabbard Is A Member Of