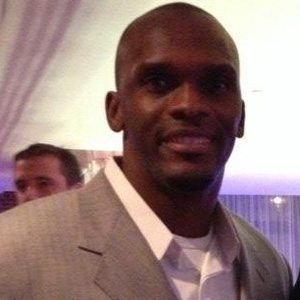 Sixteen-year NFL veteran wide receiver and a legend of the St. Louis Rams, who retired his #80 jersey.

He played for junior colleges in California before going to the University of Memphis, and then the Los Angeles Rams in 1994.

He was the Rams' Rookie of the Year in 1994, and the following two years was the team's MVP; in 2000 he helped the team to a Super Bowl XXXIV win.

He was born in Fort Lauderdale, Florida.

When he went to play for the 49ers, their own legendary wide receiver Jerry Rice allowed Bruce to wear Rice's #80 jersey.

Isaac Bruce Is A Member Of