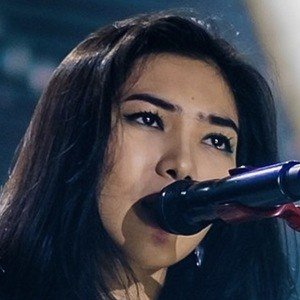 Indonesian singer-songwriter, she began her pop career in 2014. She has been singing all her life and was a classical and operatic singer for most of her life, before deciding on making a name for herself in mainstream pop.

She attended the Nanyang Academy of Fine Arts, Singapore and the Royal College of Music, United Kingdom. She learned to play the piano, electone, flute, violin, and saxophone, as well as training her voice for various music genres as a Soprano.

She has competed in singing throughout her life for scholarships and tuition grants to attend top tier singing schools. After beginning her pop career in 2014, she was nominated for a total of nine awards and won four of them in 2015 alone.

She was born and raised in Bandung. Her mother, Luana Marpanda, is a music teacher and her father, Sapta Dwikardana, is a therapist and professor. She has an older sister named Rara Sekar Larasati, who is the lead singer of Banda Neira.

She and Indonesian pop star Raisa Andriana came on the music scene and rose to mainstream fame around the same time.

Isyana Sarasvati Is A Member Of