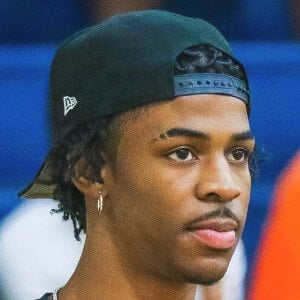 Versatile guard who gained fame during his time with the Murray State Racers. During his 2018-2019 sophomore season, he became the first Murray State player ever to record multiple triple-doubles. He was selected second overall in the 2019 NBA Draft by the Memphis Grizzlies and went on to win the 2020 NBA Rookie of the Year award.

He was named to the South Carolina class 3A all-state squad as both a junior and senior. He was unranked by most major recruiting services, and his only other major NCAA Division I offer came from South Carolina.

He set Murray State's single season assists record during his 2018-2019 sophomore season. He also became the first NCAA Division I men's player in more than 20 years to tally 40 points, 10 rebounds, and 5 steals per game.

He was born Temetrius Jamel Morant. He has one younger sister named Teniya. He has a daughter named Kaari with KK Dixon.

He played AAU basketball in South Carolina for a season with Zion Williamson.

Ja Morant Is A Member Of