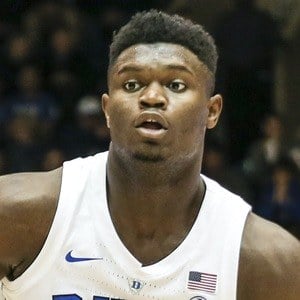 Forward who became a highly touted prospect at Spartanburg Day High School, then went on to play one season of college basketball at Duke University before declaring for the NBA. He was selected first overall by the New Orleans Pelicans in the 2019 NBA Draft.

He was ranked as the number two basketball player in the high school class of 2018 by Scout.com.

During his only season at Duke, he averaged 22.6 points per game and 8.9 rebounds per game.

His parents are Lateef Williamson and Sharonda Sampson. He has been in a relationship with his high school sweetheart, Tiana White.

He was teammates with R.J. Barrett at Duke and the two were both top 3 picks in the 2019 NBA Draft.

Zion Williamson Is A Member Of