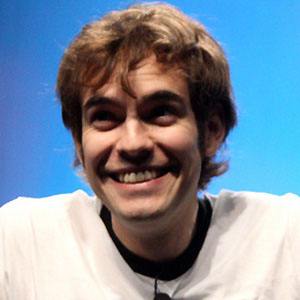 YouTube celebrity who has accumulated more than 4.7 million subscribers to his jacksfilms channel, which features videos spoofing infomercials and his "Your Grammar Sucks" video series. In 2015, he created the daily series YIAY AKA "Yesterday I Asked You."

Studying film and music at American University in Washington, D.C., he opened his main YouTube channel, Jacksfilms, in 2006.

His most popular video, "The WTF Blanket," is a parody of the Snuggie that has earned over 22 million views. His jacksfilmslive.com website has featured dates for his live show.

He was born John Patrick Douglass in Columbia, Maryland and raised with two older sisters. He got engaged to his girlfriend Erin Elizabeth Breslin on New Year's Day 2017. They married on April 21, 2018.

Toby Turner, another YouTube sensation, had a cameo in one of Douglass's Your Grammar Sucks episodes.

jacksfilms Is A Member Of