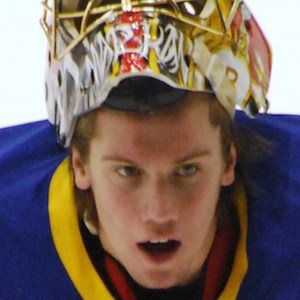 Swedish goaltender who is known for his career throughout the NHL and its minor league terrirtory, the AHL. In 2015-2016, he played his 3rd season with the Vancouver Canucks, starting 30 games and winning 13.

He began his junior hockey career in 2006 with the Swedish club Brynas IF. He subsequently signed a professional contract with the club in 2008. That same year, he was selected at #31 overall by the Florida Panthers in the NHL Entry Draft.

He played in his 2nd World Championships as a member of the Swedish national team in 2013. He and the team won the gold medal.

He was born and raised in Gavle, Sweden.

He served as the primary back-up to goaltender Ryan Miller for the 2015-2016 Vancouver Canucks club.

Jacob Markstrom Is A Member Of