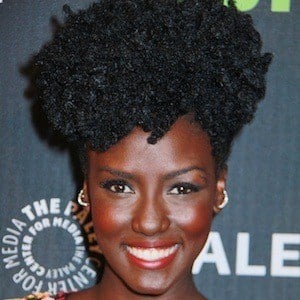 American actress who is known for her performances in both television and film. She is best known for appearing as the main character in the 2016 series Dirk Gently's Holistic Detective Agency where she plays the role of Farah Black.

After graduating from The City College of New York, she began to appear in several print advertisements as a model for a wide range of companies including L'Oreal Paris and Marshalls. She then began to star in stage productions before landing her first role in television.

As a stage actor, she is known for portraying the character of Squeak in the national tour of the musical adaptation of The Color Purple.

She was born and raised in Brooklyn, New York.

As a cast member on the HBO series High Maintenance, she starred alongside Max Jenkins and Yael Stone.

Jade Eshete Is A Member Of