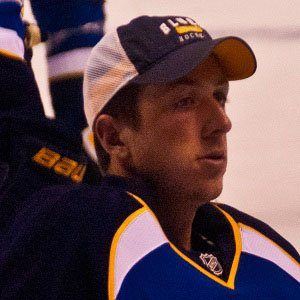 Goalie who made his NHL debut with the St. Louis Blues during the 2011-12 season. He was the backup goalie for the Blues' 2019 Stanley Cup Championship team. In 2008, he won a gold medal representing Canada at the IIHF World Under-18 Championships.

He grew up in St. Stephen, New Brunswick and was drafted by the St. John's Fog Deveils in the QMJHL in 2007.

He won the Aldege "Baz" Bastien Memorial Award as the best goaltender of the 2013-14 American Hockey League season.

His parents are Kurt and Susan Allen.

He was teammates with fellow goalie Brian Elliott in St. Louis.

Jake Allen Is A Member Of