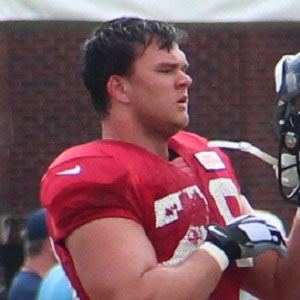 Offensive tackle who was selected 6th overall in the 2014 NFL Draft by the Atlanta Falcons after a stellar collegiate career at Texas A&M where he was named a First-Team All-American in 2012.

He was ranked as the 7th best offensive tackle in his high school class by Rivals.com in 2010, starring for Elkins High School in Missouri City, Texas.

His father was inducted into the Pro Football Hall of Fame and his brothers Kevin and Mike also played offensive line for Texas A&M.

His cousin Clay Matthews won a Super Bowl Championship in 2011 as a star linebacker with the Green Bay Packers.

Jake Matthews Is A Member Of