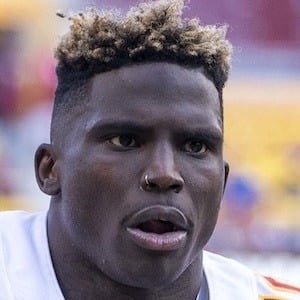 Speedy wide receiver and kick return specialist who began his NFL career with the Kansas City Chiefs in 2016. He was a Pro Bowl selection in each of his first four NFL seasons and he helped lead the Chiefs to victory in Super Bowl LIV. In 2022, he was traded to the Miami Dolphins.

He ran track in high school and was named Track and Field News' High School Athlete of the Year in 2012. That same year, he was a USA Today All-American track and field selection.

He was dismissed from the football and track teams of Oklahoma State University following a domestic violence arrest. He would finish his college career at the University of West Alabama. The arrest hurt his draft stock, but he was still drafted in the 5th round by the Chiefs after he ran a 4.29 second 40-yard dash.

His mother's name is Virginia Hill. He became a father during his time at Oklahoma State.

He joined Jeremy Maclin as a member of the Chiefs receiving corps in 2016.

Tyreek Hill Is A Member Of