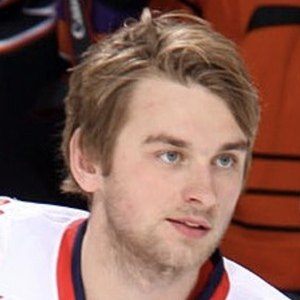 Professional hockey defenseman who was selected 19th overall by the Detroit Red Wings in the 2005 NHL Draft. He played in 273 games over seven seasons with the Red Wings before being traded to the Florida Panthers in 2016.

He played with the Kitchener Rangers of the OHL and Grand Rapids Griffins of the AHL prior to joining Detroit in the 2009-2010 season.

He was on the roster during the Red Wings' 2008 Stanley Cup run, but did not appear in any games. The team gave him a championship ring, but his name was not added to the Stanley Cup itself.

He grew up in Czechoslovakia (now the Czech Republic) and represented his country at the 2014 IIHF World Championship.

He became teammates with countryman and ageless wonder Jaromir Jagr when he was traded to Florida.

Jakub Kindl Is A Member Of