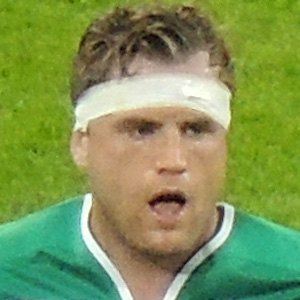 Irish rugby union number eight who was named to the Celtic League Dream Team five straight years from 2007 to 2011. He has represented Ireland internationally and won the Heineken Cup with Leinster in 2009, 2010 and 2011.

He attended Newbridge College and played in the 2004 Under-21 Rugby World Cup.

He became the first Irish player to be ejected in the professional era when he kicked Richie McCaw with his knee during a game in June 2010.

He is the youngest of four siblings, which includes two brothers and sister.

He was teammates with hooker Rory Best on the Irish squad at the 2011 Rugby World Cup.

Jamie Heaslip Is A Member Of