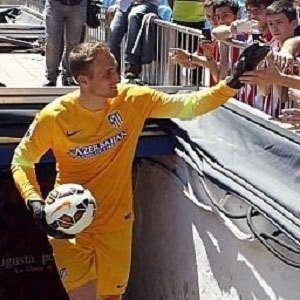 Slovenian goalkeeper who won Primeira Liga, Taca de Portugal and Taca da Liga titles with Benfica in 2014. He was named Primeira Liga's Best Goalkeeper of that season before being transferred to Atlético Madrid.

He began playing youth soccer for his home town club of Locan in 1999. He later attended the Olimpija youth academy.

Atletico Madrid paid a 12.6 million pound transfer fee to Benfica to acquire him, making him the most expensive goalkeeper in La Liga history.

His older sister Teja has played professional basketball for the Slovenian national team.

He has been teammates with winger Arda Turan at Atletico Madrid.

Jan Oblak Is A Member Of