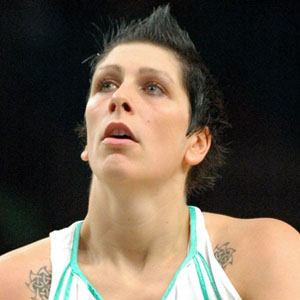 WNBA center who won a title with the Minnesota Lynx in 2013. As a Golden Gopher she set an NCAA tournament record for rebounds when she posted 75 rebounds over a 5-game stretch.

She played for the University of Minnesota, where she was named Wisconsin Player of the Year in 2001.

She was named as the WNBA's Most Improved Player in 2007.

She and her father Terence created a backboard from a tree trunk when she was a child.

She replaced Jessica Davenport in the starting lineup of the New York Liberty in 2007.

Janel McCarville Is A Member Of