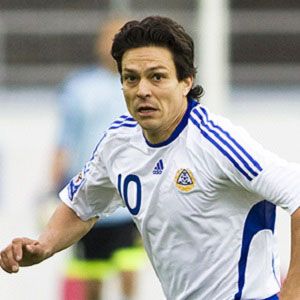 Soccer star who was named the best Finnish player of the past 50 years at the 2003 UEFA Jubilee Awards and is widely regarded as the greatest player in the country's history. He was a superstar for the Finnish national team as well as clubs like Ajax, where he won multiple Eredivisie, KNVB Cup and Dutch Super Cup titles.

He debuted for Reipas in the Mestaruussarja in 1987 at age 16.

He placed 42nd on the television show Suuret Suomalaiset's list of the 100 Greatest Finns. He is also the first Finnish athlete from a team sport to receive a statue.

His first son Caro was born in November 2005. His father Olavi Litmanen played for Finland internationally.

He played under manager Danny Blind at Ajax.

Jari Litmanen Is A Member Of