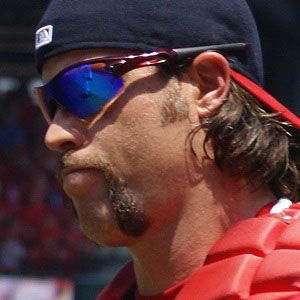 Major league catcher who played for the Cincinnati Reds, Kansas City Royals and St. Louis Cardinals during his twelve-year career. In 2001, he led the major leagues with a caught-stealing percentage of 61%.

In 2010 he was kicked in the head by Reds pitcher Johnny Cueto during a bench-clearing brawl, resulting in a season-ending concussion.

He has sons named Tyler, Dylan and Braden.

He backed up All-Star catcher Yadier Molina in St. Louis.

Jason LaRue Is A Member Of