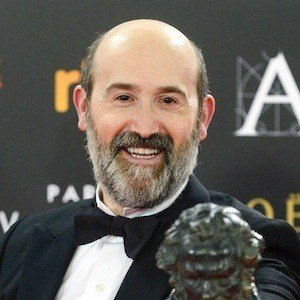 Spanish actor who is known for his variety of roles in both television and film. He is best known for playing the recurring role of Guillermo Pallomari, the chief accountant of the Cali Cartel in the Netflix original series Narcos Season 3.

He graduated from the Dramatic Art School and after worked as an usher at the Figaro Theatre in Madrid. His debut in theatre was in El caballero de Olmedo in 1991. He then expanded to television where he first debuted in Torrente, el brazo tonto de la ley in 1998.

For his performance as Antonio Goya in the film Living Is Easy with Eyes Closed, he won the Goya Award for Best Actor.

He was born and raised in in Albelda de Iregua, La Rioja, Spain. He later moved to Madrid.

With a role in the Netflix series Narcos, he stars alongside Pedro Pascal, Wagner Moura, Boyd Holbrook, and Alberto Ammann.

Javier Cámara Is A Member Of