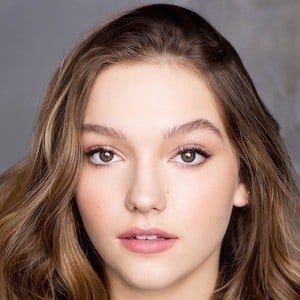 Actress, singer, dancer, and model who has appeared on such TV shows as Criminal Minds: Beyond Borders, It's Always Sunny in Philadelphia, Walk the Prank, Kidding, Family Reunion and Nicky, Ricky, Dicky & Dawn. She plays the character Peyton on Disney's Coop and Cami Ask the World and she became co-host of the Nickelodeon summer special Camp Nick.

She appeared as a guest on season six of the reality show Dance Moms. She appeared on the Nickelodeon Kids' Choice Sports Awards. She released her first song "Can't Help Me Now" in July of 2018 and has gone on to release several more original songs including "The Group" and "Electric."

She has two older brothers. In late 2018, she began dating Armani Jackson.

She has worked with such choreographers as Matt Steffanina, Guy Amir and Kyle Hanagami.