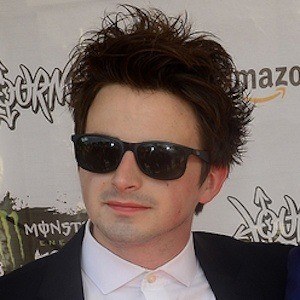 Bassist most widely known as one member of the Michigan-born electronic band I See Stars. The band released it's debut album 3-D in 2009.

He and many of his fellow band members grew up on the same block during elementary school.

I See Stars has performed at events like the Vans Warped Tour and supported acts like We the Kings and Of Mice & Men.

He was joined in I See Stars by Devin Oliver, Brent Allen, Jimmy Gregerson, Zach Johnson, and Andrew Oliver.

Jeff Valentine Is A Member Of