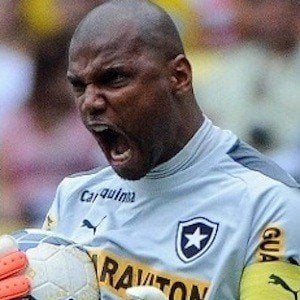 Goalkeeper who is famous for his time starting for the Brazilian club Botafogo. He signed with the club in 2009 and won the Rio de Janeiro State League in both 2010 and 2013.

He was first a track and field athlete before turning to youth soccer in 1995. He initially joined the Ferroviária youth academy that year.

He was part of the Brazilian national team that won the FIFA Confederations Cup in 2013. He helped lead Botafogo to a Brazilian Serie A promotion in 2016.

He was originally born and raised in Sao Vicente, Brazil.

He played alongside Thiago Silva at the 2014 FIFA World Cup as a member of the Brazilian national team.

Jefferson de Oliveira Galvão Is A Member Of