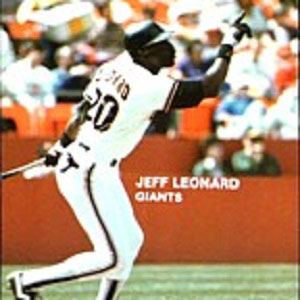 Left fielder who played for five teams from 1977 to 1990, making his debut with the Los Angeles Dodgers, and finishing his career with the Seattle Mariners.

He was a three sport star at Overbrook High School, where he ironically got myriad scholarship offers to play football and basketball, but not baseball.

He married Karen Leonard, and they had seven children between the two of them.

He hit four home runs in the 1987 NLCS, which tied him with Steve Garvey and Bob Robertson for the most ever in a league championship series.

Jeffrey Leonard Is A Member Of