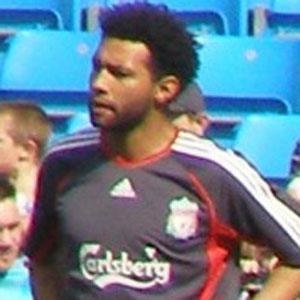 Stoke City winger who became known as much for his solid on-the-pitch play as for his off-field legal troubles.

He signed with Arsenal at 15 for a fee of £2 million, and showed promise with a hat-trick in his league debut, but soon he began showing up late to training.

In 2005 he had to play a match while wearing an electronic tracking device, the result of a drunk driving conviction.

In 2014 he married model Alice Goodwin. He was previously involved in a relationship with Hollyoaks actress Jennifer Metcalfe.

His style of play was compared to that of the former Newcastle defender Jose Enrique.

Jermaine Pennant Is A Member Of