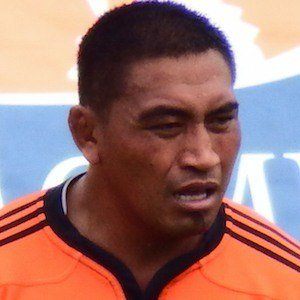 Samoan rugby union footballer who represented New Zealand in the 2003 and 2007 Rugby World Cup. He is also known for his time with Wellington, where he played from 1999 through 2007.

He was named Player of the Tournament at the Under-19 World Junior Championships.

He was named as the Ospreys' Players' Player of the Year for the 2009-10 season.

His cousin Tana Umaga was teammates with him on the Wellington Hurricanes.

He and team captain Richie McCaw played for New Zealand in the 2007 Rugby World Cup.

Jerry Collins Is A Member Of