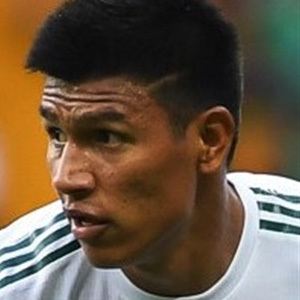 Wing player who has gained massive renown playing in the Liga MX and on the Mexican national team. He helped lead Monterrey to the Apertura 2018 Copa MX finals by scoring the decisive penalty in their semi-final win over Pachuca.

He began his youth soccer career in the Once Hermanos academy. He later debuted professionally with UNAM in 2014.

He led the Mexican national team to a round of 16 finish at the 2018 FIFA World Cup. He previously was part of the 2017 CONCACAF Gold Cup competing squad.

He was originally born and raised in Cardenas, Tabasco, Mexico.

He and Dorlan Pabon have played as teammates for CF Monterrey in Liga MX.

Jesús Gallardo Is A Member Of