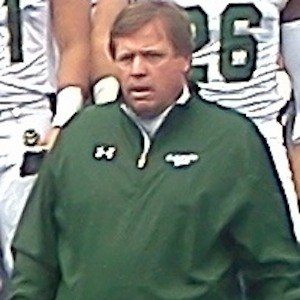 Head football coach for the University of Florida Gators beginning in 2015 who previously served as the head coach at Colorado State from 2012 to 2014, helping turn the Rams from a 4-8 ball club to a 10-2 ball club and earning Mountain West Conference Coach of the Year honors.

He played quarterback for Eastern Washington University from 1980 to 1983.

His coaching career has brought him to Eastern Washington, Montana State, Louisville, Michigan State and Fresno State as a position coach. He even had a brief stint in the NFL with the Oakland Raiders as a QB coach in 2006.

He has daughters named Johanna and Elizabeth, and a son, Jerrett, with his wife Karen McElwain.

He was an offensive coordinator and QB coach at the University of Alabama under head coach Nick Saban, helping the Crimson Tide win two national titles while he was there between 2008 and 2011.

Jim McElwain Is A Member Of