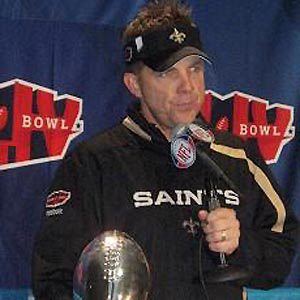 NFL head coach known for his offensive mind. He led the New Orleans Saints to victory in Super Bowl XLIV. He has coached over 10 different football teams.

He played quarterback at Eastern Illinois University and briefly played in the CFL.

He was suspended for the entirety of the 2012 NFL season after it leaked that his Saints' defense was using a bounty system on opponents' offensive players.

He had two children, Meghan and Connor, with his ex-wife Beth Shuey.

He began coaching Drew Brees on the Saints in 2006.

Sean Payton Is A Member Of