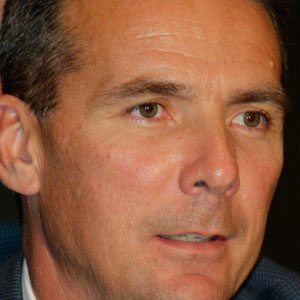 College football coach who won two BCS National Titles while he coached the University of Florida. He took over at Ohio State University in 2012 and led the Buckeyes to a National Championship in 2015 before announcing his retirement in 2018. He came out of retirement in 2021 and took over as Head Coach of the NFL's Jacksonville Jaguars.

He led Utah to a perfect season in 2004 before taking over at Florida.

He worked as a college football analyst on ESPN between his stints at Florida and OSU.

He had three kids with his wife, Shelley Mather Meyer.

Urban Meyer Is A Member Of