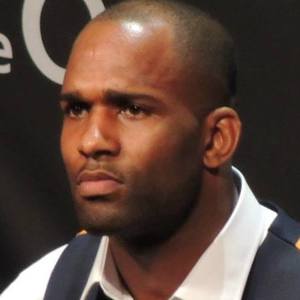 Former UCMMA light heavyweight champion known primarily for his knockout power and striking skill; debuted in the UFC in September, 2012. He was ranked #4 in the official UFC light heavyweight rankings in 2017.

He was expelled from several schools for fighting.

He defeated talented kickboxer Cyrille Diabate in the UFC in February, 2013.

His family moved from Nigeria to England when he was 10 years old. He married Nina Quaranta and they have two daughters together.

Jimi Manuwa Is A Member Of