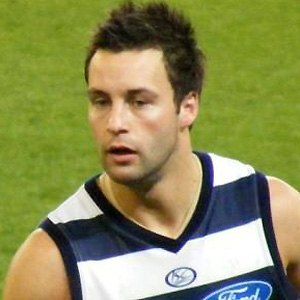 Australian rules footballer played midfield, leading Geelong F.C. to the top of the premiere league in 2007, 2009 and 2011.

He played junior football at Bell Park, and originally intended to play cricket before deciding to go back to football.

He was a two-time All-Australian in the AFL, and won the Norm Smith Medal as the best player in the 2011 Grand Final.

He cut ties with his father after his 21st birthday, accusing him of alcoholism. In 2014, he married Nadia Bartel. He has a son named Aston.

He and James Hird are amongst a small group of players who won a Premiership Medal, Norm Smith Medal, and Brownlow Medal.

Jimmy Bartel Is A Member Of