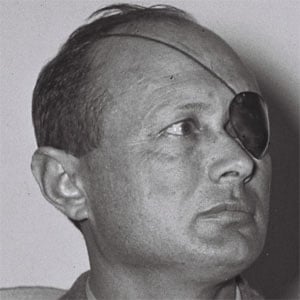 Israeli military leader and politician who served as Chief of Staff of the Israel Defense Forces from 1953 to 1958. He served as Minister of Defense from 1967 to 1974 and Minister of Foreign Affairs from 1977 to 1979.

He first joined the Jewish military (Haganah) in 1929 at the age of fourteen and became a commander in the Palestine Supernumerary Police in 1938.

He was the commander of the Israeli forces during the 1956 Suez Crisis.

He was married to Ruth Dayan from 1935 to 1971. He had three children, two of whom wrote books about their relationships with him.

He served in the administration of Prime Minister David Ben Gurion.

Moshe Dayan Is A Member Of