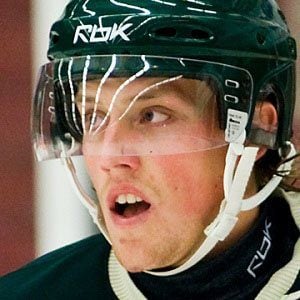 Swedish center who debuted in the NHL with the Detroit Red Wings during the 2011-12 season after being drafted 88th overall by the team in 2007.

He began his professional career with the Swedish team Boras HC in 2007 and first played in the United States with the AHL's Grand Rapid Griffins during the 2008-09 season.

He helped the Swedish Team win silver at the World Junior Championships in both 2008 and 2009.

He was born in Munkedal, Sweden.

He became teammates with star winger Henrik Zetterberg on the Red Wings.

Joakim Andersson Is A Member Of