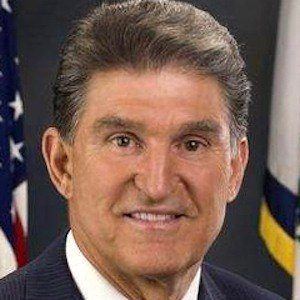 Politician and Democrat wo served as the governor of West Virginia from 2005 to 2010 and became the state's senator in 2010 after longtime Senator Robert Byrd passed away. He won his first full term in office in 2012.

He entered West Virginia University on a football scholarship in 1965, and was elected to the West Virginia House of Delegates in 1982.

While in the Senate, he introduced the Silver Alert Act, a nationwide network for locating missing adults and senior citizens. He modeled this act after the AMBER Alert.

He had three children with his wife Gayle.

He succeeded Robert Byrd as the U.S. Senator from West Virginia.

Joe Manchin Is A Member Of