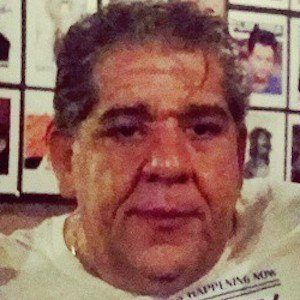 Comedian known for his boisterous personality and gravelly voice whose success as a stand up has led to appearances in various feature films. He's hosted the podcast The Church of What's Happening Now. The podcast ran from 2014 until 2019.

He grew up in New Jersey before moving to Boulder to attend the University of Colorado. While there, he was arrested and spent time in prison, where he's said he started doing stand up.

His movie and TV credits include Spider-Man 2, Maron, The Bronx Bull, and My Name is Earl. In 2021, he appeared in the movie The Many Saints of Newark as the character Buddha.

He's good friends with Joe Rogan and has often collaborated with him during his career.

Joey Diaz Is A Member Of

The Dog Who Saved Summer
Analyze That
59 Year Olds
Comedians