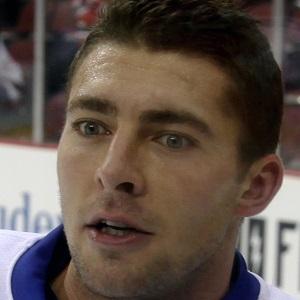 Goal-scoring winger known for his accurate shot; he was an NHL All-Star for the Toronto Maple Leafs in 2012, a year in which he recorded 25 goals and 67 points.

He played for Fort Saskatchewan in the ABHL before the Anaheim Ducks selected him with the 7th overall pick in the 2002 NHL Draft.

On May 9, 2006, he became the first player in Anaheim Ducks history to score a hat trick in the playoffs. He totaled 4 goals in the game as the team defeated the Colorado Avalanche 4-3 in game 3 of the Western Conference Semifinals.

He grew up in Fort Saskatchewan, Canada.

He played alongside All-Star center Sergei Fedorov on the Ducks.

Joffrey Lupul Is A Member Of