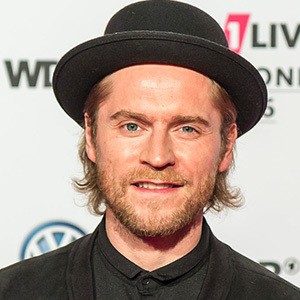 Singer who found popularity in his naive Germany with gold-selling albums like Für Immer Ab Jetzt (2013) and Alles Brennt (2015). Some of his most popular songs include "Nichts Geht Mehr," "Alles Brennt" and "Wenn Du Lebst."

He was raised in Geldern-Kapellen, Germany. He was discovered while playing a block party in Iserlohn in 1999.

He finished second in the 2013 Bundesvision Song Contest with the song "Nichts Geht Mehr."

He has two brothers and two sisters.

He has performed live with the band Revolverheld, featuring singer Johannes Strate.

Johannes Oerding Is A Member Of