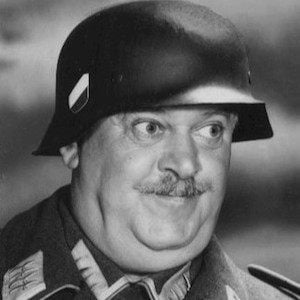 Played the role of Master Sergeant Hans Georg Schultz in Hogan's Heroes who had the catchphrase ""I know nothing! I see nothing! I hear nothing!"

He completed studies for a law degree, but instead decided to pursue acting.

Fleeing to the U.S. at the start of World War II, he gathered dozens of television appearances, in shows like Mr. Ed and Perry Mason.

He grew up in a Jewish family in Vienna, Austria.

On the big screen, he appeared in close to 40 films, including playing a German military officer in the Cary Grant and Ginger Rogers film, Honeymoon.

John Banner Is A Member Of