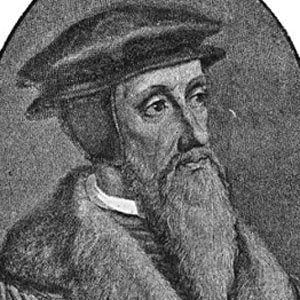 French pastor who led the Protestant Reformation and help found Calvinism in the middle of the sixteenth century. He was a controversial religious figure while he was alive and remains one today.

He believed in the religious notion of predestination, a doctrine that postulates that people aren't created equally but rather some are preordained to eternal life, while others are bound to eternally damned.

He was born to Jeanne le Franc and Gerard Cauvin and raised with three younger brothers. His father Gerard worked for the ecclesiastical court.

He was a leading figure in the Protestant Reformation, much like his German counterpart Martin Luther .

John Calvin Is A Member Of