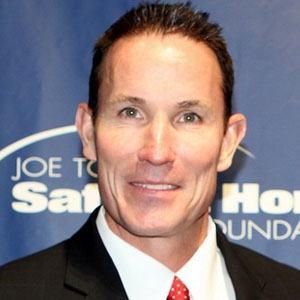 MLB catcher best known for his time with the New York Yankees and Tampa Bay Rays. He was inducted into the Irish American Baseball Hall of Fame in 2008.

He graduated from George Washington University in 1988 and was drafted by the Boston Red Sox the same year.

He had a 27-game hitting streak in 1996, which became the third-longest such streak ever accomplished by an MLB catcher.

He has children named Kristen, Logan, and Brian.

He famously broke up a no-hitter by pitcher Pedro Martinez in the ninth inning.

John Flaherty Is A Member Of