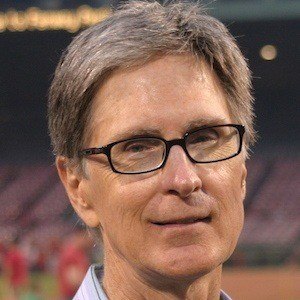 Businessman and sports mogul known primarily for being the principal owner of the Boston Red Sox, which he purchased in 2002. Under his ownership, the Red Sox won their first World Series since 1918, breaking the infamous "Curse of the Bambino."

After plying his trading chops in agriculture in the 1970s, he opened the brokerage firm John W. Henry & Company in 1981. He purchased his first team, the Tucson Toros, in 1989.

Through his Fenway Sports Group, he purchased Liverpool FC in 2010. He also bought a 50% stake in Roush Fenway Racing in 2007 and, in 2013, became principal owner of The Boston Globe.

He owned the Florida Marlins from 1999 to 2002 before selling the club to Jeffrey Loria.

John W. Henry Is A Member Of