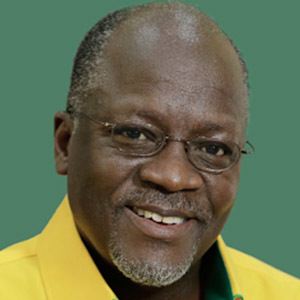 Politician who served as the fifth President of Tanzania in 2015. He was elected after having served as an industrial chemist at Nyanza Cooperative Union Limited, a Member of Parliament and the Deputy Minister for Works.

He worked as a teacher at the The Sengerema Secondary School in the early 80s. He received a doctorate degree in chemistry from the University of Dar es Salaam.

He faced scrutiny for his anti-LGBT policies, including his enforcement of a 30-year prison sentence for homosexuality.

He married schoolteacher Janeth Magufuli, with whom he had several children.

He succeeded Jakaya Kikwete as the President of Tanzania.

John Magufuli Is A Member Of