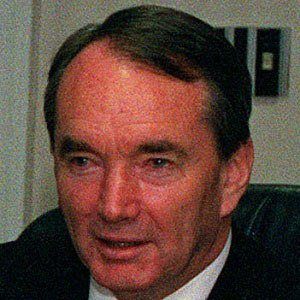 From the 1970s through the early 2000s, this Liberal Party of Australia politician served in the Australian House of Representatives. During this period, he also held the offices of Minister for Business and Consumer Affairs, Minster for Industry, Science, and Tourism, and Minister for Defense.

After studying commerce and accounting at the University of Queensland and before entering politics, he was a highly successful stockbroker and business executive.

From 1996 to 1998, he served as Australia's Vice-President of the Federal Executive Council. He outlined his visionary plan for Australian defense reform in a document titled Defence 2000: Our Future Defence Force.

He grew up on a cattle farm in Queensland, Australia.

He held his first ministerial position under the administration of Australian Prime Minister Malcolm Fraser.

John Moore Is A Member Of